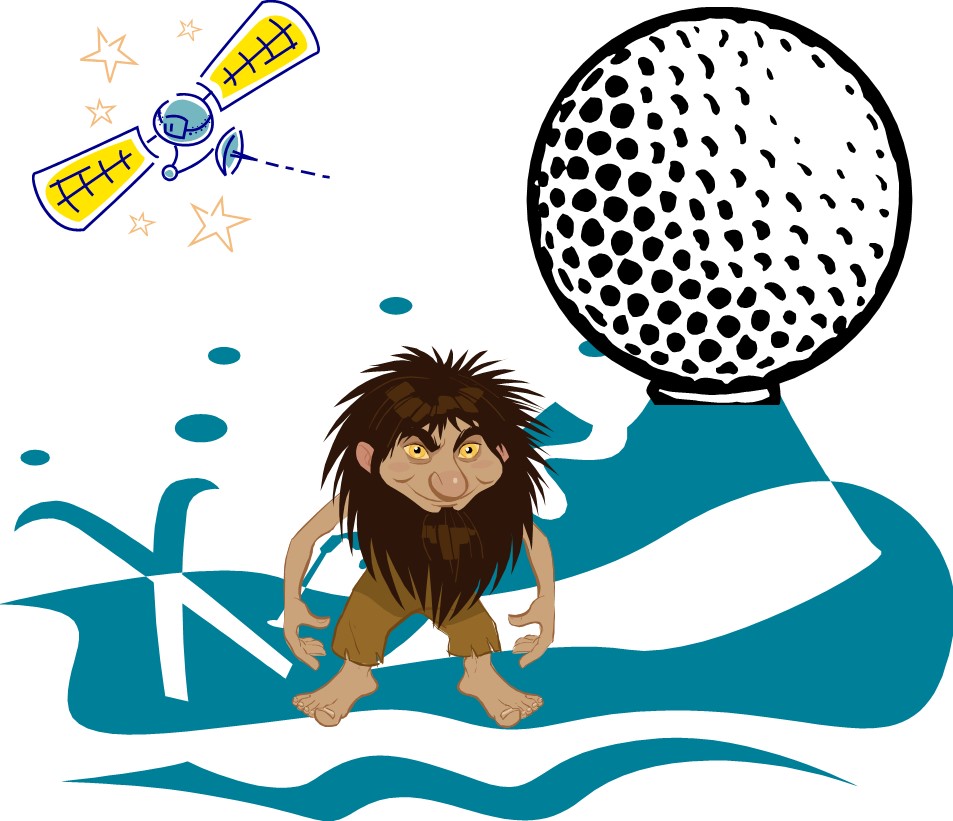 Trolls–remember when only billy goats had to deal with them??  Now humans have to worry about Trolls’ tolls, not just in snarky, crude comments, but in space operations.

Actually, it’s only a select group of humans, and Troll, while it deals with space, is on Earth–specifically on ice (well, 300 kilometers (187.5 miles) from the ice’s edge).  In a few of the Mad Spaceball’s earlier lessons (here and here), there were some words about the importance of ground stations as part of the communications links with satellites in orbit.  So maybe it’s time to start highlighting a few of them, especially the ones located in extreme climates, which brings us to Troll.

As the song goes, “I’ve been to Paradise, but I’ve never been to Troll,” so a lot of what I’m writing about is going to be based on Wikipedia and other sources.  But I can give pretty accurate guesses on why a ground station would be located where it is, and I guess that’s something (and I hope you’ll think so, too).  So why is Troll so interesting and cool?  Simple–it’s in Antarctica!

That location might make sense, considering the owners of Troll.  Kongsberg Satellite Services (KSAT), is, according to their site, a Norwegian (brrr) commercial company that decided to plunk down ground stations at both of Earth’s poles (no jokes, please–I’ve heard them all), one of them sited next to the Troll research station and identified as TrollSat (we’ll talk about the others in future posts).  KSAT state the Troll ground station is located at 72 degrees South and 2 degrees East.

TrollSat was opened in 2008, so it’s relatively new.  It has one 4.8 meter (16 feet) and one 7 meter (25 feet) uplink/downlink antenna.   KSAT say this ground station will help in communicating with more than 60 different satellites.  I imagine there is little chance for obscuration (objects like mountains, trees and skyscrapers getting in the way) of the line of sight between the ground station and the satellites zooming over it.  But with more than 60 satellites in orbit, KSAT must have some sort of organizational system to help prioritize which satellite has access to TrollSat antennas at any given time.  It doesn’t sound like KSAT owns any of the satellites accessing TrollSat–they provide pretty much dumb pipe space services.

The climate TrollSat is in is very cold–summer might reach a balmy 32 degrees Fahrenheit, but winter can be downright North Dakotan, with temperatures as low as -58 degrees Fahrenheit.  The wiki states that Troll is afflicted with a midnight sun in summer, and polar night in winter (the links are there for you to learn, so click on them–don’t let the laziness get you).  Why put a ground station in such an inhospitable environment (unless you’re a Scandinavian–then it’s probably quite tolerable)?

It allows the satellites to communicate with polar low earth orbiting (LEO) satellites at least once per orbit. Remember the orange example in Lesson 4?  Polar and near polar LEO satellites go over the North and South poles of Earth every orbit.  So, depending on the altitude of the LEO satellite in an orbit of 90 to 120 minutes (give or take) would put the ground station in view every…90 to 120 minutes (tah-dah!!).  According to KSAT, a polar LEO satellite has the opportunity to access the ground station up to 26 times a day.

This means if a satellite has taken pictures or has gathered other data in one orbit, it will have the opportunity of nearly every orbit to get its data download to the ground station and passed the space operations center (the Norwegians call it TNOC for Tromsø Network Operations Centre).  TNOC likely consists of the people and facilities monitoring satellite health and status, sending satellite commands, and passing information, generally.  Since it’s remotely run from the TNOC in Norway, there are very few people at this ground station.  KSAT say there is staff on site at TrollSat to handle “corrective engineering operations and preventative maintenance.”

So no respite for the other idi–uh, researchers, at the research station at Troll, either, then.

2 thoughts on “Troll: leaving the bridge behind”