WARNING, ESPECIALLY TO MY E-MAIL SUBSCRIBERS, THIS PARTICULAR POST IS NOT ABOUT SPACE IN ANY WAY.  IT WILL PROBABLY STAY ON MY SITE FOR A FEW DAYS.  I AM SAD—THIS STORY IS ABOUT THE REASON FOR THE SADNESS.  SO, IF YOU’RE LOOKING FOR THE USUAL CHIPPER POSTS, THEN DON’T READ THIS.  OTHER STORIES WILL BEGIN TO BE POSTED IN A FEW DAYS AGAIN. –TMSB

This is what it feels like to get old.

“Yackety Sax” blared out from my telephone.  It was my dad calling.  My wife and I looked at each other before I answered—we knew the call wasn’t good news.

“Hi John.  One of the sisters called your aunt.  They told her that Uncle Rog passed away yesterday.  The visitation and viewing will probably be held Monday.  His funeral will be Tuesday.  I know you drove down here nearly a week ago.  Do you think you’ll be driving down again?”

We continued a very short conversation, but the expected bad news had been conveyed.  I hung up and confirmed with my wife what we both knew:  Uncle Rog was dead.  My sadness made me feel helpless and older.

I was about to go in to the hospice apartment to visit with my uncle, probably for the last time.

I didn’t know it at the time, but I was a little scared.  This was a person I had known for over 40 years.  Would that same, smiling, fun person be there, in that little hospice apartment?  I wasn’t sure, but it was important to me, for many, many reasons, to see him anyway.  Would he even remember who I was?  The fear is obvious now, but not then.  Life is full of changes, but there are some that are hard to accept.

I’m driving alone, through the deserts of Colorado, New Mexico, and eventually Arizona, stopping overnight at my parent’s house.  My wife can’t come along with me because she’s the only truly employed person in the household.  It makes her sad that she can’t go, and I can see that.  She loves Uncle Rog, too.  So I leave, missing my friend.  The drive is long, and while pretty, there’s also not too much to see.  Plenty of time for thinking.  Plenty of time for remembering.  Uncle Rog was really family.

First of all, Uncle Rog is my great-uncle.  He’s my dad’s uncle.  He had married into the family and, as during the time when I got to know him, was just as happy and outgoing then early in life.  He was obviously happy even before then according to the pictures he showed us of his duty in the Navy during World War II.  His ship was stationed in the Philippines.  He showed me pictures of him and his friends wandering through some towns.  A few more of him and a local monkey.  The ship he was assigned to.  Etc.  But in all those pictures there was one constancy:  his genuine smile.

It was a good smile.  A knowing smile.  A smile that knew you were up to no good, but grabbed you up in a dental hug and said “You’re welcome!”  An unforgettable smile.  I think my dad thinks of him in the same way.  I can’t imagine my dad’s pain—he knew Uncle Rog longer than I did.  I know my dad loved him very much.

I enter my uncle’s room.  It’s a big room.  It’s very nice and was obviously meant to be the living room.  There’s a big screen television to my left.  On my right, there’s still a wonderfully decorated Christmas tree.  But the focus, the reason for my visit, is sitting in a very comfortable chair in the middle of the room.

He hasn’t seen me yet.  He’s talking to one of his daughters.  When they’re done, I approach him.  “Hi Uncle Rog!” I say as happy-sounding as I can be.  And then I see his smile!  “What’s the occasion?” he asks.

I wasn’t alone during the second part of my drive through the rest of Arizona and then California.  I had asked my aunt if she wanted to visit with Uncle Rog, too.  My aunt accepted, and we made the nearly six-hour drive together to one of my Uncle Rog’s daughters.  She and her husband had extended a kind invitation to me and my aunt to stay at their house overnight, which we accepted.  They weren’t well off financially, but such hospitality was a constancy in my uncle’s family.  His three daughters had long ago inherited and applied lessons from his happy, outgoing, and curious nature.  They had also inherited his smile.  And they unhesitatingly made us feel a part of their families, just like Uncle Rog.

This was why I, either as a child with my mom and dad, or as a husband with my wife, always enjoyed visiting with any of my uncle’s family.  I had a lot of good memories of those visits.  The six hour drive had uncovered a lot of them while talking with my aunt.  Particularly memories of my time with my uncle.  My aunt reminisced about Uncle Rog when she was small.

Uncle Rog and Aunt Jean would visit with my dad’s parents in Indiana from their home in Illinois to go out and do fun things.  My grandmother was Aunt Jean’s sister.  This connection is how he got to know dad.  During that time, Uncle Rog attended college in Illinois.  After graduation, he was eventually hired by Bell and Howell as an engineer.  After a few years, the company moved his family from Illinois to the suburbs of Los Angeles, California.  A few years after that, he became a real estate agent.  Even then, Dad and my aunt had visited with Uncle Rog’s family occasionally.  And Uncle Rog and his family made sure they were welcome.

I am welcome.  This is the Uncle Rog I knew.  And yet, not quite.  He is so much thinner from the cancer.  I wasn’t shocked—everyone had warned me he had lost weight.  But, he seems smaller than me, which is incredible when you consider he was at least 5 inches taller than me.  The unexpected change, though, is his voice.  It is on the verge of a whisper, constantly in need of something to drink to keep it audible.  I answer his question “There’s no occasion.  I just figured I should see how you are getting along.”  I give him the best hug I can.  I’m shocked at how fragile he feels in my arms.

We talk.  It takes a little coaxing.  He’s obviously curious, maybe a little confused, about why two of his daughters, a niece, and great-nephew are all in the same room, focused on him.  One of his daughters thinks he needs a nap.  So we leave them for a few hours and eat lunch.

Done with lunch, we come back.  He’s better.  I notice for the first time he’s wearing a sweatsuit.  It’s odd to see him in that.  His daughters have put together a whole bunch of memory albums for him.  The albums sit on the sofa table next to Uncle Rog.  I ask him if he’d like to go over a few.  His eyes light up.

The first album is all about his achievements and work with his real estate company.  We talk about his old office, the people he worked with, and the work he did as an agent.  He seems surer in his speech during this time, but maybe I’m hoping to hear that sureness.

One of his daughters offers me a beer.  I accept.

He picks the next album.  It has the Navy logo on it.  These memories he really relishes.  He’s not jumping up and down, but the knowing smile starts to come out again.  We go over the pictures and he explains them to me and my aunt.  He notices me enjoying the beer.  He asks for one, which I think shocks his daughters.  But they are happy to give him a bottle of beer.

He’s enjoying this.  He’s talking about his ship and his buddies.  He’s taking occasional, small sips from his beer bottle.  I’m happy to be here in this room.  It’s one more memory, a precious one.  I try to remember everything about the scene.  The Christmas tree, where my aunt and his daughters are sitting.  The things they are doing.  The satisfied smile on my uncle’s face as he sips his beer.

He’s tired, though, so this is the last time I will see him.  The doctors say so.  I move closer to him, and carefully hug him.  I whisper, “Thank you, Uncle Rog, for everything.”  For a few seconds, the tiredness leaves his face.  He looks straight at me and says in the strongest voice I’d heard from him that day, “You’re welcome!”  It’s a knowing look, and then once more, the smile.  I don’t think I’m imagining it.  I nearly break down there.  My aunt says her good-byes.  We all wave good-bye as we walk out his door.  He’s still smiling.  It’s the last time I see him.

Uncle Rog passed away.  Good-bye and Thank You Uncle Rog!  We love you!!  I will always remember you! 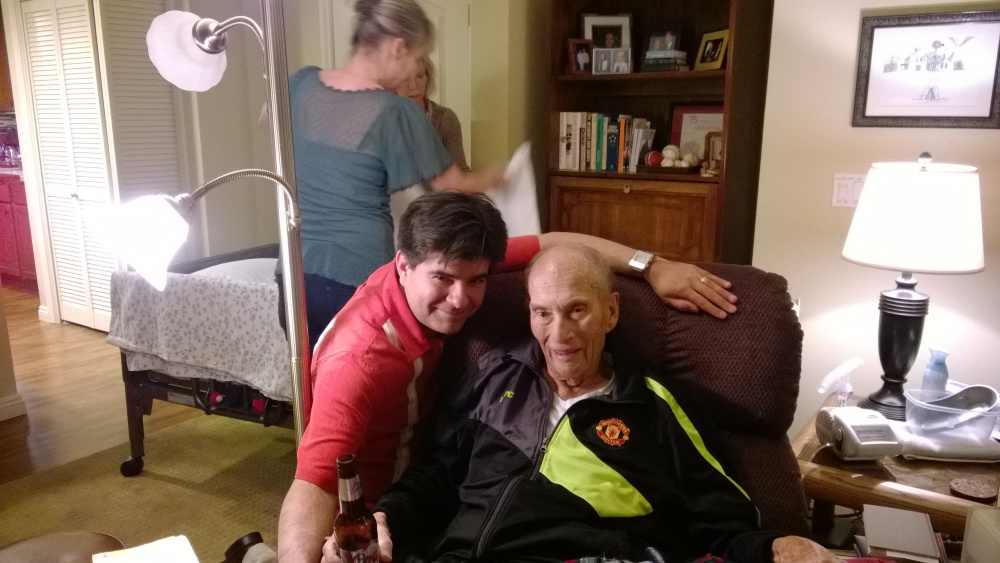 I know this is sad, and I’m sorry if I’ve made anyone else sad.  But I had to write this.

I will leave those of you who read through this post a funny part of my visit.  I had asked Uncle Rog why he decided to quit Bell and Howell and become a realtor.  Without even stopping to think, he gave me a serious look and then said “Engineering is boring.”

I laughed long and hard at that.  I still giggle at his answer now.