The previous lesson left you hanging, maybe even perturbed, with the question of why anyone would want to use a satellite in a highly elliptical orbit (HEO).   After all, a HEO satellite requires a ground station or two with a moveable (steerable) antenna to speak to it (or the satellite’s antenna has to be gimbaled to allow continuous aiming at the ground station).  The satellite goes through the Van Allen belts four times a day.  And there are times in its orbit when it appears to hover, but other times when it’s moving very quickly around the Earth.

But it’s a very useful orbit if a country or organization uses it well.  The Russians, in particular, seem very fond of the HEO for their satellites.  Some of their satellites still use HEOs today.  Consider the location of Russia on the world’s face.  The country is primarily at very northern latitudes, with the bulk of the country between 50 and 70 degrees north latitude.  The country also spans two continents.

Cross-country communications were important to the Soviets–especially to its military (as it is with the US). One way to lower communications infrastructure costs and still deliver country-wide/global communications capability is through using communications satellites (satellites that could receive and transmit radio signals from and to the Earth).  Another factor for consideration is the Soviet Union’s huge coastline within the Arctic Circle.  The majority of the coastline is above 70 degrees north of the equator.  Why is this factor important in a satellite communications discussion?

During the Cold War, the Soviets had built up a tremendous submarine fleet, with a few ports well within the Arctic Circle.  The Soviet submarines routinely prowled those waters, but they would have been a less effective force with no communications link from headquarters.  There were also bomber bases in the Arctic “garden spot.”  Satellites were an obvious solution to the communications problem, but geosynchronous (GEO) communications satellites can’t see very well above 70 degrees latitude (read the “Curves and Angles” lesson for a refresher).  Radio signals also have a tough time going through all that atmosphere to and from GEO satellites—a very powerful radio transmitter would need to be used, meaning more weight would be added for batteries, solar panels, etc.

Could the Soviets have used GEO communications satellites?  Yes.  They have used, and the Russians still use, satellites out in that orbit.  But for the Soviets, there weren’t too many launch location options below 50 degrees latitude.  There are reasons why the United States uses the Kennedy Space Center to launch satellites into GEO.  There are reasons why the European Space Agency launches from French Guiana.  Both launch complexes are relatively close to the Earth’s equator.  Kennedy is a little over 28 degrees north of the equator, and Kourou, French Guiana is an even closer 5 degrees north of the equator.  These are great locations to launch a satellite into GEO, with Kourou the better of the two options. 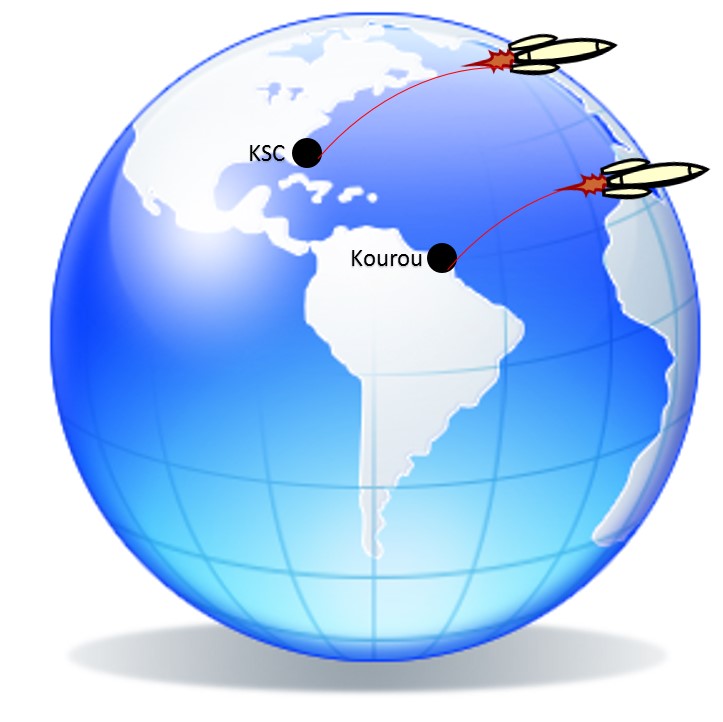 The reason both are excellent launch sites has primarily to do with fuel and payload when trying to get a satellite out to GEO.  And of course there are barely any populated areas directly east of the sites, meaning no on gets hurt if something goes wrong during a launch.  The further a launch site is to the north or south of the equator, the more fuel it needs to get a satellite into GEO.  More fuel means more weight, affecting satellite payload weight requirements for launching to GEO.  Another option is building newer, more powerful rockets to put capable satellites into GEO.  But either option meant more money for getting satellites into GEO for the Soviets.

The HEO, though, was a relatively inexpensive orbit, fuel-wise, to launch Soviet communications satellites into.  The Soviets wouldn’t need as much fuel to get the satellite into a HEO inclination when compared to the fuel requirements for a GEO.  And the orbit’s Field of Regard (FOR) from apogee could also easily encompass the Earth’s North Pole.  Especially if they were using an orbit at a particular angle relative to the Earth’s equator (the orbit’s inclination) with a particular orbital period.

There’s a name for that orbit, to be talked about next lesson.