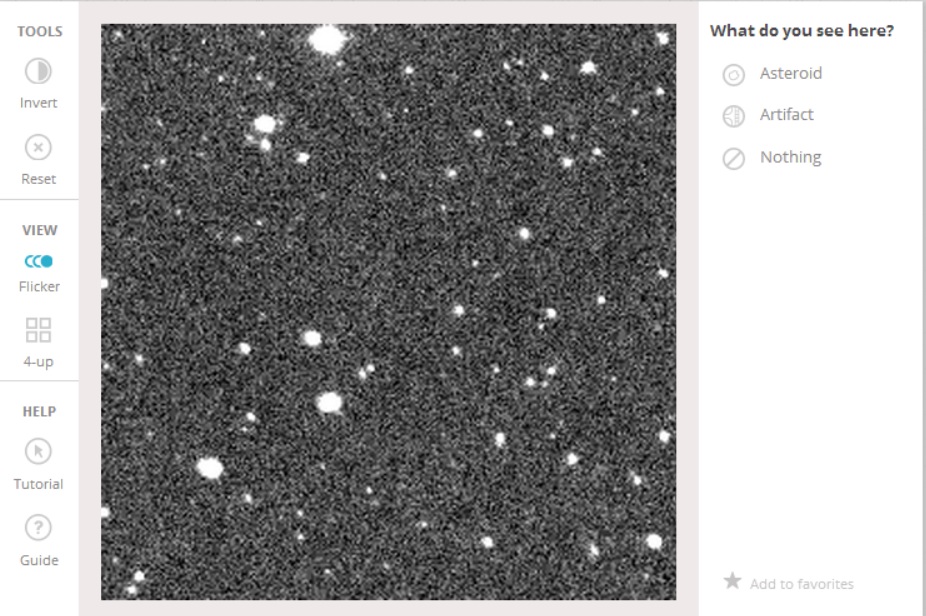 The above picture looks exciting, doesn’t it?  At least it should if you are yearning to join the elite ranks of the “Asteroid Hunters.”  You, too, can be an Asteroid Hunter thanks to Zooniverse.  The website introduced the asteroid hunting project, called “Asteroid Zoo,” earlier this week.

If the organization’s name sounds familiar, it’s because I wrote a post about Zooniverse’s Moon Zoo nearly a month ago.  That project was created for the public to help in identifying craters and such on the Moon’s surface.  But this project is a little more–urgent?

On reason to identify asteroids is so we can send a Bruce Willis-type up in a fancy space shuttle to destroy it.  In other words, the idea is to identify asteroids that might pose a threat to Earth.  The site uses the 2013 Chelyabinsk meteor impact as an example of an unexpected visitor from space.  So the hope is there are some people with some spare time who are willing to look at multiple frames of images like the picture above, and identify an asteroid or three.  The two videos below give a little more information about Chelyabinsk’s incident.

The images come from the Catalina Sky Survey (CSS), a project with a mission to identify near-Earth objects (NEOs) or potentially hazardous asteroids (PHAs).  PHAs would be the asteroids that pose a risk of impacting with the Earth.  CSS allows for a chance to assess the asteroid threat, and perhaps give opportunities to mitigate it, before it hits the Earth.

According to the Zooniverse explanation for CSS, the project has identified over 100,000 objects so far.  Maybe you can help find a few more?

Oh, and the other reason to look for these asteroids?  Believe it or not, they might be a good resource for humans to use, once we’re a little more out there in space.  There are quite a bit of raw materials in these rogue rocks, such as iron, nickel, and cobalt (at least that’s what the Zooniverse folks are saying).

This all means, then, should you decide to join, you would be an Asteroid Hunter, possible world savior, and future resource gatherer.  Not too bad for someone drinking coffee at their desk on a Sunday afternoon.