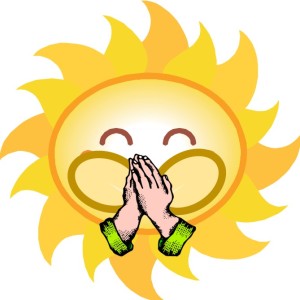 So, Science World Report tried to spice things up a little with this headline:

But if you read the article, I hope you understand it’s really not the end of the world.  I know, I know–whoever names these things needs to consider what they sound like to the layman.  To me, it sounds like the very severe aftermath of a bad burrito.  But coronal mass ejections (or, CMEs, for those that want to make this thing sound more incomprehensible), the official name of the sun puking matter and energy, will barely register with Earth’s inhabitants.

First off, it takes a few days for this stuff to reach the Earth.  Second, the Earth is fairly well protected from this “sun-puke” by the Earth’s magnetic field.  It’s mainly charged particles, which naturally will follow the flow in the magnetic field.  If you’re in the north or south, you might see a brighter aurora.  Maybe if you’re a ham, you’ll notice more static.

Satellite-wise, there’s not much to do.  These things can be hardened against the space environment.  But there’s really no “battening of the space hatches” that can be done.  No Iranian space monkeys to lock things down.  So a lot of organizations accept this risk as a part of space weather (yes, it’s a thing), and sit, and wait to see what happens.

But we do have some satellites actively monitoring the sun.  The most interesting one is SOHO, the Solar & Heliocentric Observatory.  It is in a much different orbit so it can specifically watch the Sun, moving in line with the Earth, between the Earth and the Sun–a halo orbit.