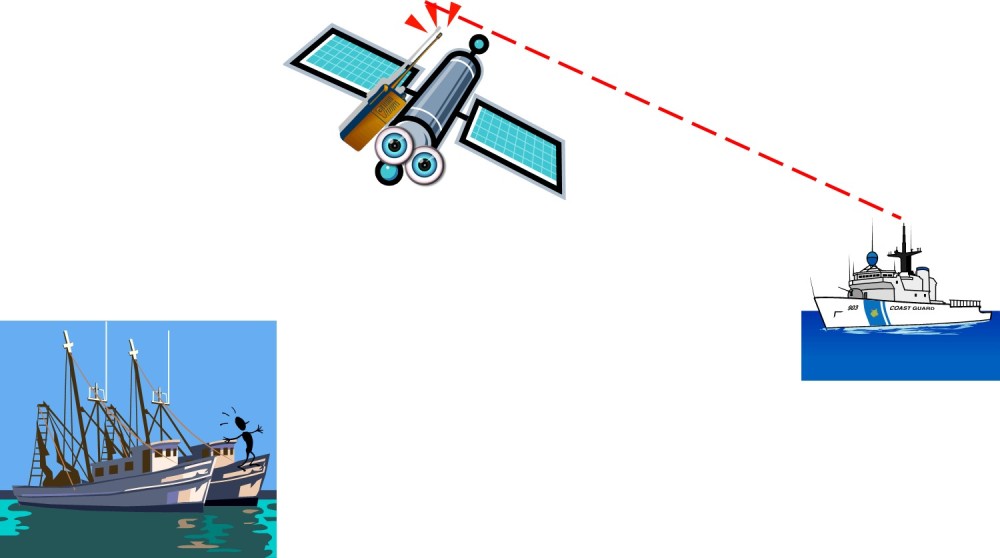 If your livelihood involves fishing illegally, your chosen profession looks like it might become a little more interesting, soon.  A partnership has been established among the Pew Charitable Trusts, the United Kingdom’s Satellite Applications Catapult, and exactEarth Europe.  Their mission is to turn the tables on those fishermen illegally attempting “Deadliest Catch” re-enactments in protected waters.

It looks like exactEarth will provide the ship tracking data from the Automatic Identification System (AIS) to be combined with other information (maybe satellite “pictures” of ship lights at night) from Satellite Applications Catapult.  AIS is a radio transmission signal, primarily used in shipping, for tracking ships.  Simply explained, AIS works by using GPS on board ships that hooked into the AIS to determine a ship’s location.  Then the AIS sends a signal to a receiver, whether on a satellite or attached to a radio tower, to let other people know where the ship currently is, and where it looks like it’s heading.

The number of times the radio signal is sent from the ship to the receiver can be as often as every 2 seconds, but might average once every 60 seconds.  The number of times an automatic message is sent every minute can vary, since each AIS station can determine its own radio transmission schedule (you can find out more about AIS from this handy Coast Guard page).  ExactEarth Europe specializes in vessel tracking using small satellites.  The whole idea of this effort is to use exactEarth’s data, plus other data (not really elaborated on) from Satellite Applications Catapult to figure out which fishing ships might be dropping a net or two into areas listed as “verboten” and protected from fishermen and fishing factories.

They would then pass this information on to governments, agencies, and the like.  Basically the information is available to anyone who might be interested in knowing which fishing vessel is breaking the law and is possibly able to enforce the law once the pernicious piscine pilferer is caught.  Of course, this only really works if most offenders have AIS on-board, AND if AIS isn’t somehow “turned off.”  Or maybe a fishing vessel’s circuit breaker for AIS “popped” if it happened to be near protected water.

That may be why Satellite Applications Catapult is getting involved.  Again, there was no clear information on exactly what they’re supplying, but apparently their data or collection tools can be used along with AIS to help pinpoint fishy filchers.  Hopefully they’ll come forth with more information (or maybe it’s there, and I’m not seeing it…).  It would be interesting to know if this kind of use of the data is violating particular agreements with the AIS customer base.

While the tech is definitely different, this seems akin to the little “black box” insurance agencies ask customers to put on a car.  Originally its justification is for gathering accident data, but then someone decides the data can also be used to see if you “violated” the speeding laws, stopping laws, etc.  Then that someone would hand that data over to law enforcement.