In previous lessons you’ve learned about the Low Earth Orbit (LEO) and the Geosynchronous Orbit (GEO).  There are pros and cons in using each orbit.  Generally for satellites in LEO orbit, particularly imagery satellites like those owned by DigitalGlobe and SkyBox, the closer the satellites are to the Earth, the more detail of the objects and activities on the Earth’s surface they’re able to see.

But the con for LEO imagery satellites is that they’re so close, their Field of Regard (FOR) and Field of View (FOV) are very limited (go here for a reminder of what FOV and FOR are).  This means they can see pretty much what is right under them and a little bit around them—but,  and some of this depends on the camera and lens technology, it will be fairly detailed.

The GEO satellites FOR allow for them to see the whole of the Earth’s surface that’s facing them (the Earth’s disk).  And they stay over that particular portion of the Earth because their orbital speed matches the speed of the Earth’s rotation.  But, while weather imagery satellites can give a good understanding of patterns, they can’t see the details.  They’re just too far out.

Perhaps there’s another orbit, one that possibly bridges the capabilities between the other two orbits?  Such an orbit exists, but it’s very eccentric.  It’s an orbit that can be up close to the Earth, but also far away.  It’s called a Highly Elliptical Orbit (HEO).  It’s a very interesting orbit in which many different missions are accomplished.  Also, notice the trend:  LEO, GEO, and HEO.  Space operators try to keep things simple and rhyming acronyms are one way to do it.  Plus we’re not that smart, so if we can memorize this stuff, you can.

The HEO name is a fairly good description of the orbit, but for those who require a visual aid, imagine an orbit that’s shaped like an American football, with the tips more rounded.  This is an ellipse.

Now imagine that football is tilted in in a kicking tee. This represents the orbit’s inclination.  It’s at a particular angle with the Earth’s equator.  And yes, LEO satellites also have inclination. 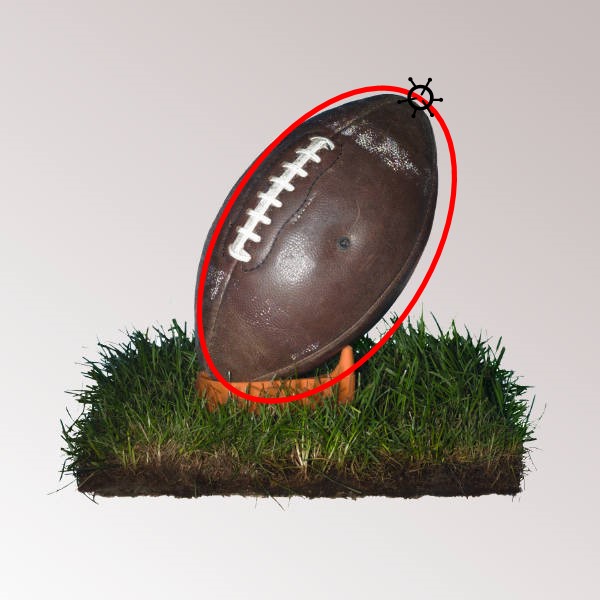 But this demonstrates a HEO property that’s different from a LEO.  Like LEO, a HEO orbits around two fixed points, called foci.  You may be wondering how a LEO has two fixed points—a LEO is typically circular.  And that’s still true, but with two points.  In the case of the LEO circular path, the two fixed points are much closer together.  They are nearly on top of each other.

That shape, tilt, and closeness of one end to the Earth is, in essence, the path of a satellite’s Highly Elliptical Orbit.   And now, without the football: 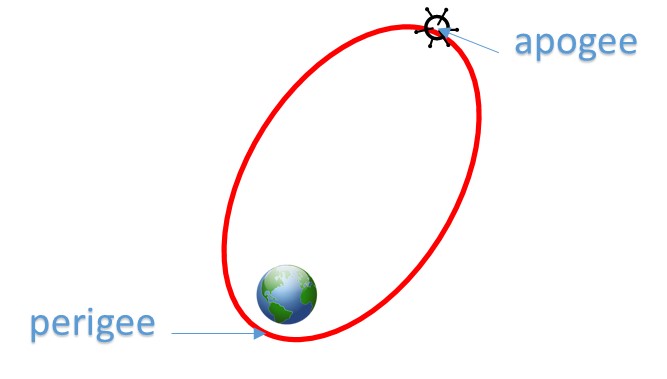 The part of the elliptical orbital path that’s closest to the Earth is called perigee.  The part of the orbital path that’s farthest away from the Earth is called apogee.  So congratulations!!  You’ve just learned one of Kepler’s Laws of Planetary motion:  “The orbit of a planet is an ellipse with the Sun at one of the two foci.”  –wikipedia.org, Kepler’s laws of planetary motion.  If the name “Kepler” sounds familiar, it’s also because a satellite was named after him.  You can go the NASA satellite mission website to understand why it’s named Kepler, and what it’s doing.

I wonder what else there is to learn next lesson about HEO?